B cell life without getting Syk

Scientists show that mature B cells can survive without the tyrosine kinase Syk.

B lymphocytes are an integral part of our adaptive immune system and their development and function is tightly regulated by several signaling pathways. The spleen tyrosine kinase Syk is an important player in transducing signals from the B cell receptor (BCR). While it is well established that Syk is required for B cell development, less was known about its role in the survival and maintenance of mature B cells. Scientists from the Max Planck Institute of Immunobiology and Epigenetics and the University of Freiburg now showed that Syk is required for the activation but not the maintenance of all mature B cells. These Syk-deficient B cells are critically dependent on the function of other signaling modules such as CD19 and BAFF-receptor. This study sheds light on the intricate signaling network that promotes B cell survival.

B lymphocytes are maintained in large numbers (~1011 = 100 billion) in our body. B cells initially develop in the bone marrow and then migrate to the spleen to fully mature. Mature B cells are activated by the binding of a foreign antigen to their BCR and differentiate into antibody-producing plasma cells. The activation signal from the BCR is transduced inside the B cells by the spleen tyrosine kinase (Syk), which results in differentiation and proliferation. 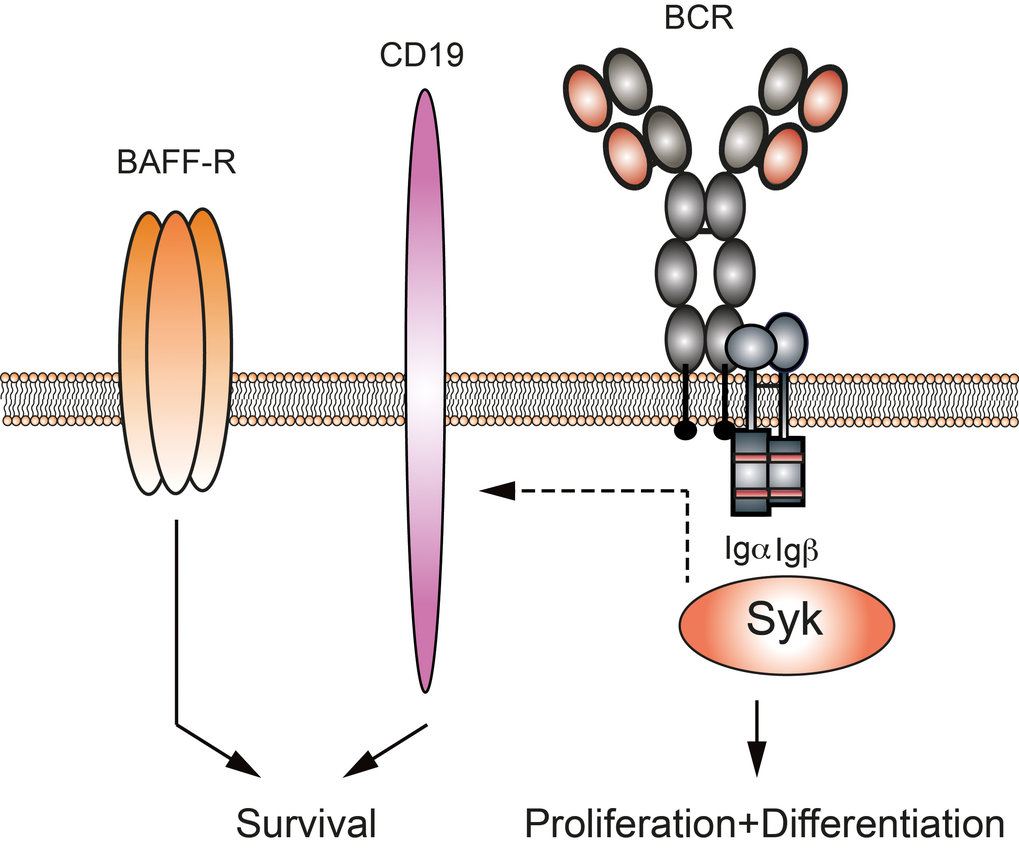 A research team around Dr. Elias Hobeika and Prof. Michael Reth, Head of the Department of Immunology and Professor at the Faculty of Biology, now further investigated the role of Syk for the activation and maintenance of mature B cells. For this, the group generated conditional mice that allowed the inducible and B cell-specific deletion of the Syk gene. The analysis of these mice showed that one third of the mature B cell pool survives for an extended time in the periphery without Syk. “This was an exciting finding for us, as it clearly illustrates the differential requirements for Syk in mature versus developing B-cells” explains Dr. Hobeika. “The comparatively large amount of these Syk-deficient B cells also put us in a position to analyze their signaling behavior.” These experiments demonstrated that Syk-deficient B cells can not be activated upon BCR stimulation. Furthermore, the researchers observed that the survival of Syk-negative B cells requires the expression of the BCR-coreceptor CD19 and the binding of the pro survival factor BAFF to the BAFF-receptor. “Our findings show that B cell survival signals can be processed in the absence of a functional BCR signaling module.” summarizes co-first author Ella Levit-Zerdoun, a former PhD student within the International Max Planck Research School for Molecular and Cellular Biology (IMPRS-MCB). The data presented in this study will help to understand how B cells are normally maintained and how the dysregulation of B cell signaling can lead to lymphomas and autoimmunity.