A small protein works as a tumor suppressor in B cells

B cell Leukemia originates in B cells that have undergone malignant transformation during their development from precursors cells to mature B cells. If timing and regulation of switching between cell proliferation and differentiation during this process is not exact, it leads to an uncontrolled expansion of cancerous immune cells. Scientists from the Max Planck Institute of Immunobiology and Epigenetics in Freiburg (MPI-IE) and the University of Freiburg have now understand how switching between the alternating phases B cell development works. Thereby they discovered that the protein BTG2 works as tumor suppressor in precursor immune cells. The scientists lead by Michael Reth hope that the revealed mechanisms in precursor B cells may provide new avenues to treat also other types of B cell leukemia. The study was published in the most recent issue of Nature Immunology. 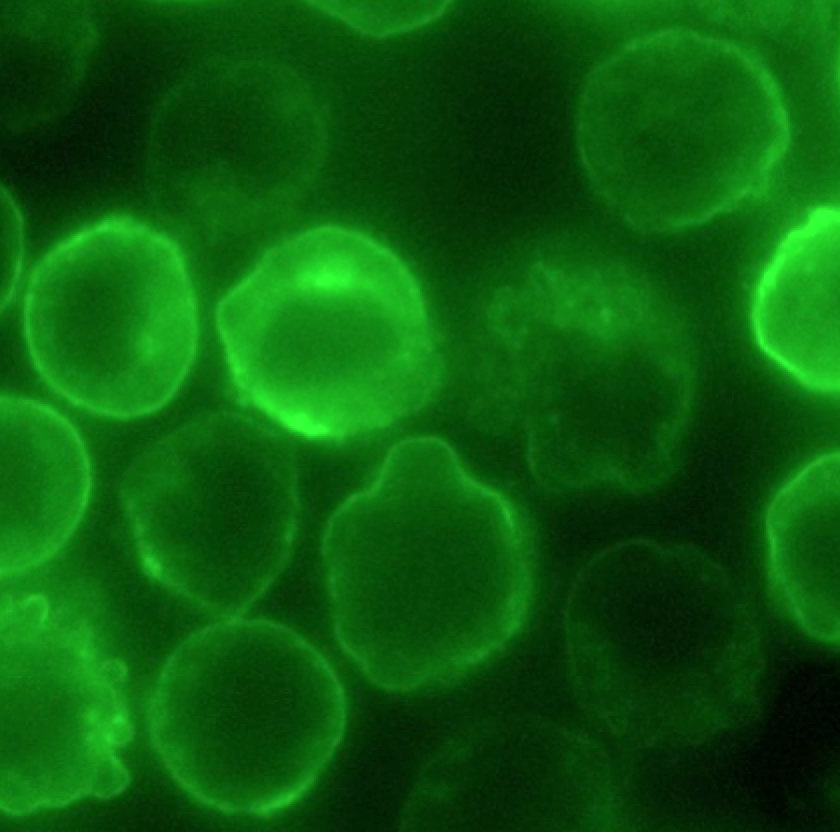 B lymphocytes or in short B cells are a subclass of the white blood cells. Upon their activation B cells develop into B-plasma cells, which then produce antibodies. Antibodies are capable of recognizing and neutralizing harmful pathogens. Like all cells of the blood system B cells originate from the bone marrow and evolve from precursor cells (pre-B cells). During this development, they undergo alternating phases of cell growth and division interrupted by phases of differentiation to become finally mature B cells.

It is known that for instance pre-B cell leukemia frequent in young children arise due to misregulated switching between proliferation and differentiation. In this case pre-B cells are locked at an early stage of development and continue to divide and rapidly expand in the bone marrow. The malignant cells cause damage by inhibiting the production of normal blood cells.

New research by the laboratory of Michael Reth at the Max Planck Institute of Immunobiology and Epigenetics (MPI-IE) and University of Freiburg has now discovered the role of a protein that works as a tumor suppressor in such cancerous pre-B cells. The team found that a small protein called B cell translocation gene 2 (BTG2) plays a crucial role for the pre-B cells to switch from proliferation to differentiation phases. “We saw that BTG2 is up-regulated upon pre-B cell differentiation and that an induced expression of the protein in pre-B cells stops their proliferation” explains Elmar Dolezal, first author of the study. 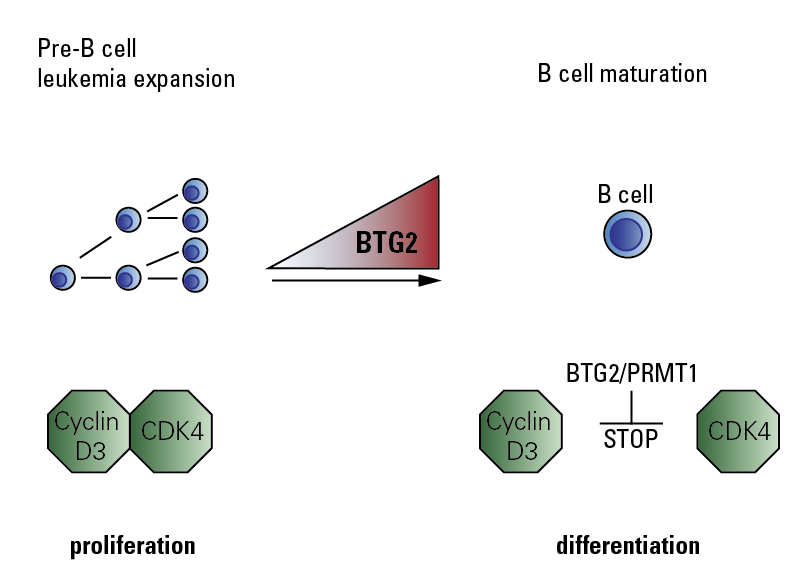 The team took a more deeper look on how BTG2 stops pre-B cells expansion and was able to show that it acts in concert with another protein called arginine methyl transferase 1 (PRMT1). “Once activated by BTG2, PRMT1 prevents the formation of CDK4/Cyclin D3 complexes that are essential for cell cycle progression and thus blocks the cell expansion”, says David Medgyesi, project leader in the Reth lab (see Fig. 2).

It was known before that tumor cells silence the BTG2 gene. For example it is hardly expressed in B-Cell Acute Lymphoblastic Leukemia, the most common type of cancer in children. The study by the Reth lab shows that reintroducing BTG2 in mice tumor cells prevents the uncontrolled cell expansion and stopped the tumor growth. “We have discovered how BTG2 works as a tumor suppressor in pre-B cells and this may help to better understand and treat also other B cell leukemia”, says Michael Reth. “One can think of activating the BTG2 function in B cell tumors.” Thus, the Freiburg researchers hope to explore in the future how exactly BTG2 is regulated and develop treatments to introduce the protein to B cell tumors in patients.