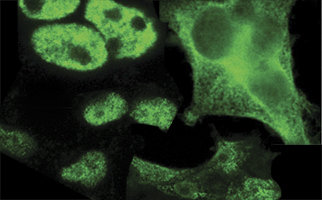 New methods for the lab

CAPRI enables a zoom in on RNA-protein interactions: New technique to study RNA binding proteins in Drosophila and human

RNA-protein interactions play a vital role in regulating gene expression, cellular processes, and disease. Researchers at the Max Planck Institute of Immunobiology and Epigenetics (MPI-IE) in Freiburg now developed an innovative suite of workflows to characterize RNA-protein interactions at multiple layers of resolution ranging from multisubunit protein complexes close to the RNA to single amino acids which make contacts with RNA molecule. The technique called “CAPRI” for Crosslinked and Adjacent Peptides-based RNA-binding domain Identification was developed in the lab of Max Planck Director Asifa Akhtar and has far-reaching applications in biology and medicine. 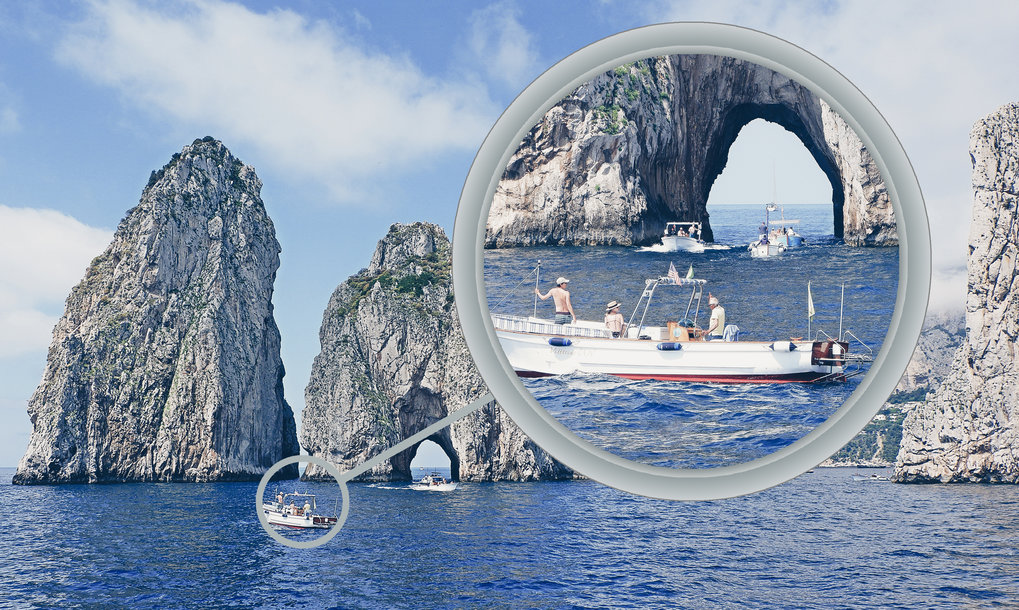 Fig. 1 CAPRI enables a high-resolution zoom in on RNA-protein interaction.

Fig. 1 CAPRI enables a high-resolution zoom in on RNA-protein interaction.

With the mapping of virtually all three billion DNA base pairs in the human genome, there has been a shift in life science research. Now, there is a steadily increasing interest in how this genetic information is regulated. Consequently, the role of DNAs cousin, RNA, is in focus to understand how our genes are controlled. RNA molecules, mostly known as messenger RNA (mRNA) are not only mediators that carry a gene sequence from the DNA to the protein assembly factory, but they are also important protagonists of many different cellular processes.

“RNA molecules decorated with specific proteins to hide and expose certain RNA regions turn into powerful regulatory units of the cell. They play fundamental roles in gene regulation, cellular housekeeping, development, metabolism and disease,” says Asifa Akhtar, Director at the MPI-IE. From the approximately 25,000 proteins encoded by the human genome nearly 10% form a subgroup of so-called RNA-binding proteins (RBPs) can interact with all types of RNA and thereby coordinate RNA functions and fate.

Peeling all regulatory layers at one time

In their newest study, the lab of Asifa Akthar in collaboration with the Proteomics facility led by Gerhard Mittler, both at the MPI-IE in Freiburg, developed a suite of workflows to investigate these interactions. “To date, most focus in RNA-protein interactions has been given to direct interactions between the molecules,” says Amol Panhale first-author of the study. “But with our efforts, we have expanded the scope and are able to cover the entire mRNA regulatory network.“ That includes no less than four different layers of resolution from multisubunit protein complexes that bind directly or indirectly to the RNA down to single amino acids; all measured simultaneously from only one single sample. 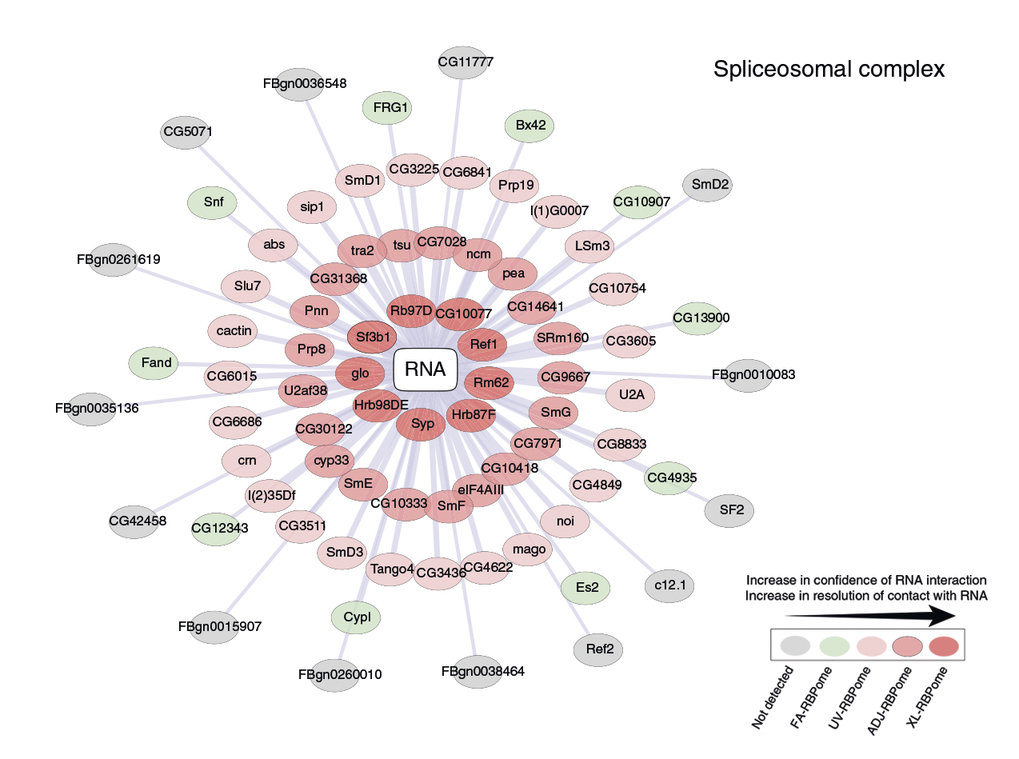 With their approach, the team captured a comprehensive RNA-protein interactome of the model organism Drosophila melanogaster and report more than 1500 direct RNA-binding proteins and nearly 2500 RNA-associated proteins. Interestingly, the latter include an unprecedented number of proteins involved in multiple cellular pathways like metabolism, endocytosis and DNA replication. These proteins usually are not related to the protein synthesis machinery. Thus, these findings suggest a crosstalk between the protein synthesis machinery and other cellular processes.

For most of the identified proteins that directly bind RNA, the precise protein section that is in contact with the molecule is often unknown. Hence, the team devised as part of their workflow a method named “CAPRI” to map these so-called RNA binding domains in a high throughput manner. Their innovative mass spectrometry-based method brings together two complementary techniques to simultaneously identify peptides close to RNA and the precise amino acids that have contact with the RNA molecule. “It’s like watching a boat landing from afar. With CAPRI, you have a pair of binoculars at hand to see not only the ship itself but also the passengers and even the rope anchoring the boat at the RNA-pier,” explains Amol Panhale the high-resolution mapping of the RNA-protein interactome with CAPRI.

A better insight into the undiscovered countries

With its high resolution, the CAPRI workflow presents a robust and straightforward way to investigate further RNA-protein interactions that can contribute to urgent biological and medical questions. The Freiburg researchers, for instance, used CAPRI to map more than 3,000 protein regions that are close to the RNA in both Drosophila and human cells. 40 percent of the detected regions are new interaction sites, and a comparison showed that many of them are evolutionarily conserved between the two species.

“Interestingly, CAPRI allowed us to identify protein regions which lack a well-defined structure. Despite their disordered structure, these regions perform important functions, such as the formation of membraneless organelles in the cell, which is currently an exciting new field of reserach,” says Amol Panhale. Recently, it was shown that mutations in these so-called intrinsically disordered regions (IDR) have implications for many neurodegenerative diseases such as Alzheimer’s or Parkinson’s disease. The researchers hope that CAPRI allows scientists worldwide to study the evolution of these RNA binding protein regions as well as map mutations in these regions in patients. This will pave new targets for future therapeutic interventions.

MAPCap: A new method to reveal the secrets of gene regulation through analysis of transcription start sites

The position, shape and number of transcription start sites (TSSs) play a critical role in gene regulation. Researchers from the Max Planck Institute of Immunobiology and Epigenetics (MPI-IE) have developed a new method called “MAPCap” along with an analysis software “icetea” which allows detecting TSSs and comparing their expression between tissues and conditions. 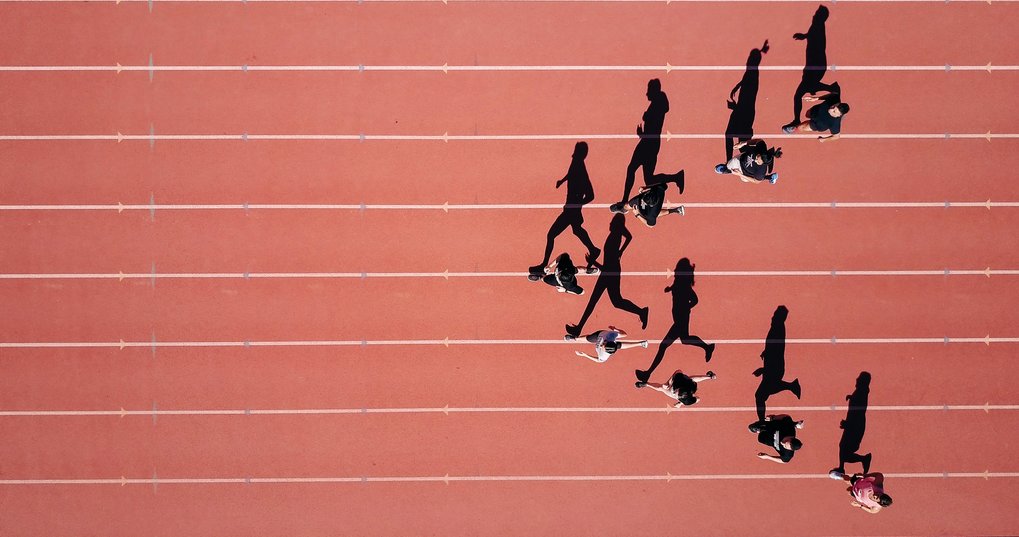 RNAs are essential molecules that connect genes (DNA) to their function within cells. Within cells, genes can “download” their information into the RNA in a process called “transcription”.

Where does the transcriptional run start?

In their latest study, the team of Asifa Akhtar developed a new method to dissect the role of TSS selection in transcriptional regulation. “In order to understand the function of alternative TSSs in cell- and tissue-specific transcription programs, their precise mapping is unavoidable. Our new method allows not only accurate detection of TSSs, but also quantification of expression changes,“ explains Asifa Akhtar.

The method called “Multiplexed Affinity Purification of Capped RNA“ (MAPCap) is fast, easy to perform and is shown to work with cultured fruit fly and mammalian cells, and also in developing flies. Multiplexing of samples and external RNA controls in MAPCap reduces the duration of the experiments, and analysis of data with icetea allows us to quantify TSS with high accuracy.

Differences between sex and stages

By applying their method on developing fly embryo and larvae, the team also detected TSSs that showed sex-specific or developmental differences. “Upon mutation of MLE, an important protein for X-chromosome gene regulation, we detected a median 1.9 fold decrease of X-chromosomal TSS expression in male flies. What surprised us was that the mutation of MLE also affected TSSs of several genes with sex-specific functions that are not on the X-chromosome,“ says Vivek Bhardwaj, the first-author of the publication.

With this new technique, researchers can now discover new TSSs in genomes of different species and also compare the effects of different proteins in regulating alternative TSS selection.