To understand how gene expression is regulated during differentiation of a stem cell into all its daughter cell types one has to be able to discriminate distinct cell types and states in a complex mixture, such as a tissue or an organ.

Genome-wide profiling of gene expression in individual cells, e.g., by single-cell RNA-seq, reveals an unbiased sample of all cell types in a complex mixture. The transcriptome of a cell can be looked at as a fingerprint revealing its identity. We use single cell mRNA sequencing to investigate the transcriptome and profile other molecular readouts such as chromatin accessibility. Since such methods require tissue digestion, and, hence, spatial context is lost, we are pairing these single-cell sequencing methods with microscopic imaging-based in situ single-cell analysis utilizing highly multiplexed single-molecule FISH. Integrating these approaches enables the reconstruction of tissue architecture at single-cell resolution and facilitates the derivation of cell-cell interactions based on molecular pathway activity in co-localized cells. 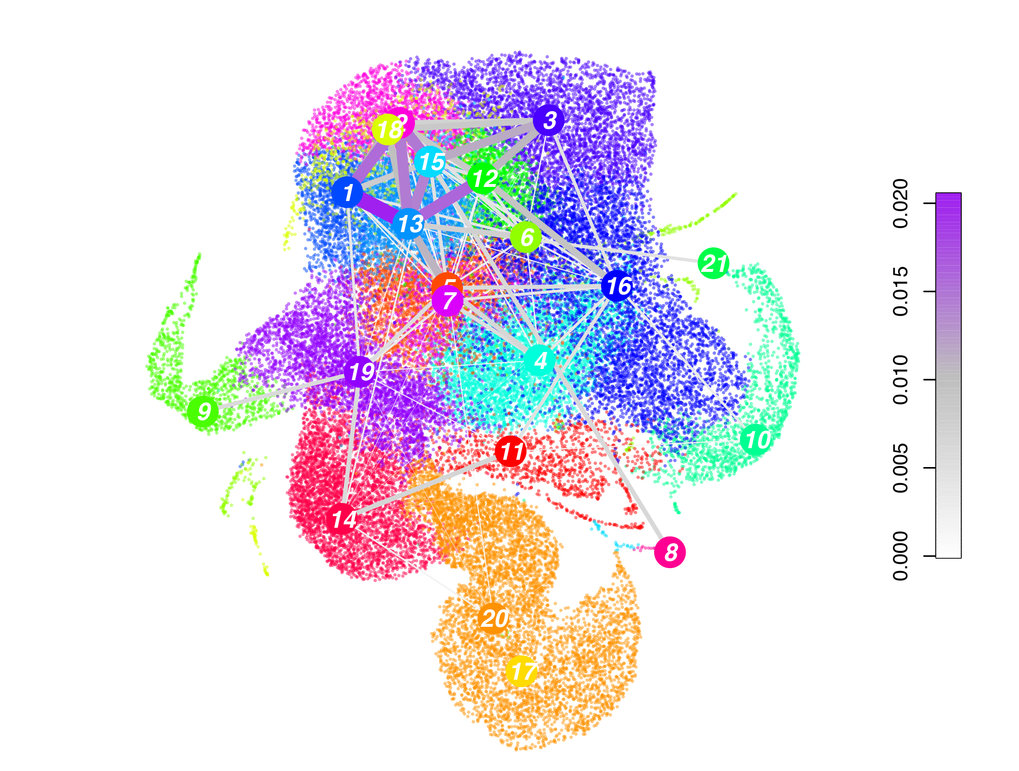 Our lab develops computational methods to integrate such multimodal data for the inference of differentiation trajectories, the quantification of gene expression noise within cells, and for the derivation of molecular interactions between co-localized cells within the tissue (Grün et al., Nature, 2015; Grün et al., Cell Stem Cell, 2016; Herman et al., Nature Methods, 2018; Grün, Nature Methods, 2020) (Figure 1). We are particularly interested in rare cell types, since those are oftentimes overlooked and can have crucial functions. For example, the stem cells themselves often occur at low frequencies.

Our strategy allows to derive lineage trees de novo and to revise current models for cell differentiation in well-studied systems, such as the bone marrow. Moreover, marker genes for cell types and states can be identified with high specificity, which permits the purification of these cells and subsequent population-based assays, e. g. ChiP-seq, to measure epigenetic marks and transcription factor binding. The ultimate goal is the derivation and functional validation of a mechanistic model of gene regulation during differentiation by combining these population-based measurements with single cell gene expression data, and functional experiments, e.g., in mouse or organoid models.