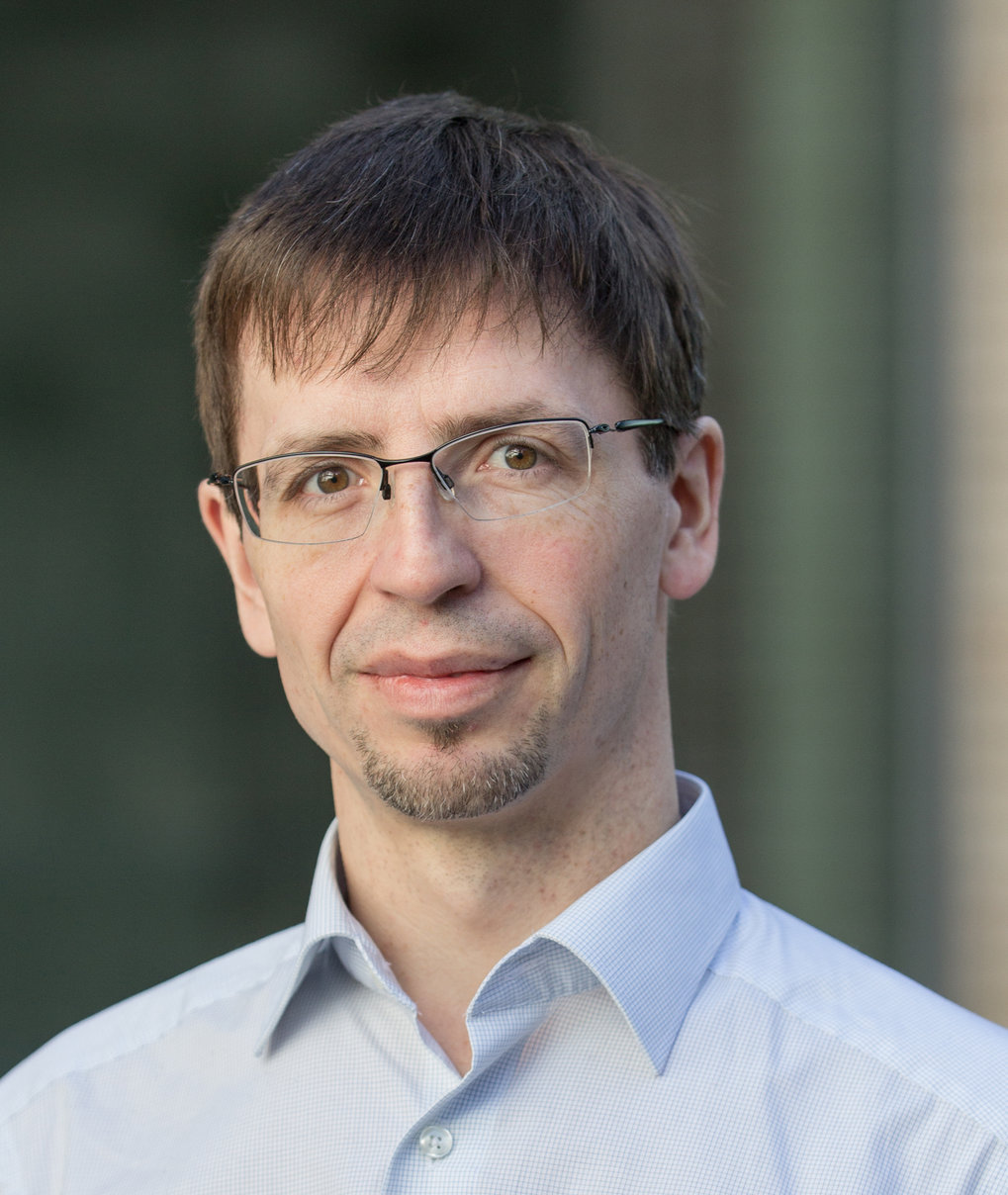 Substantial variability of mRNA levels across cells of the same type has been observed in any organism studied, ranging from bacteria and yeast to mammals. Gene expression variability can have diverse origins. Heterogeneity of cell states following extrinsic or intrinsic stimuli, e. g., due to cell cycle, changes in the microenvironment or differentiation events, can be one reason for cell-to-cell transcriptome differences. Moreover, many genes are presumably transcribed in bursts rather than at a constant rate, leading to substantially different transcript numbers in individual cells, commonly addressed as gene expression noise. Gene expression variability causes fluctuations in protein levels, and can entail physiological differences between cells. 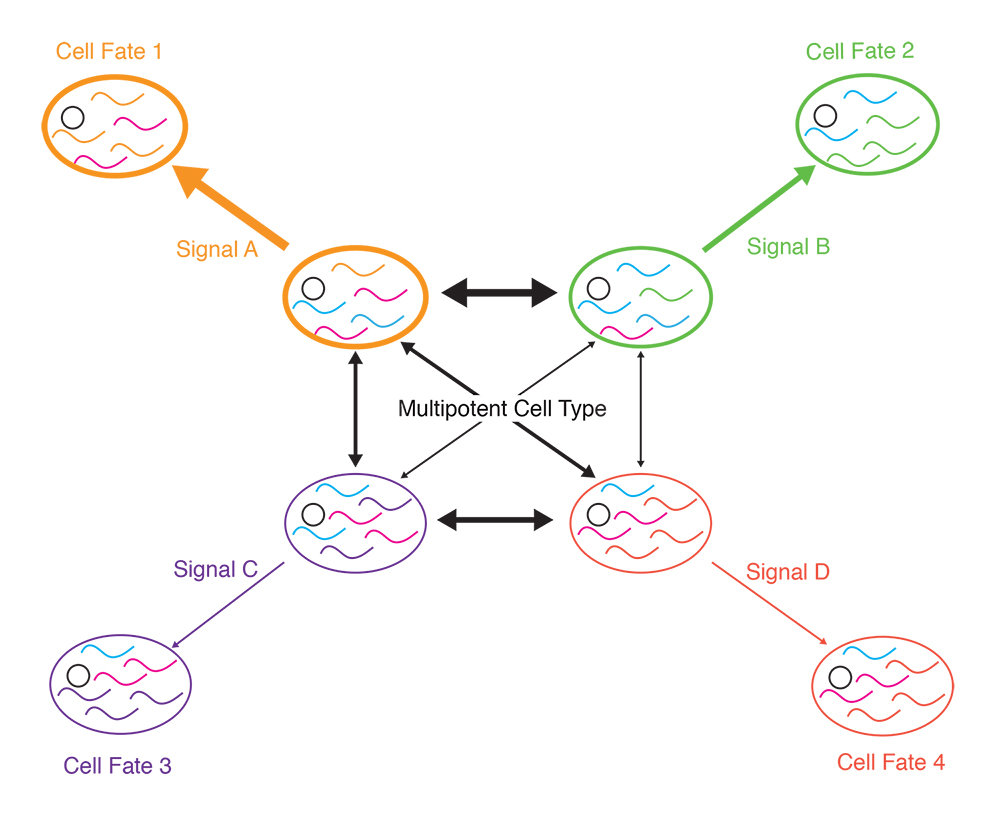 In our lab we investigate how stem cells robustly maintain their multipotent state and reliably execute differentiation programs with spatial and temporal precision in the presence of gene expression noise. We propose a model in which stem cells can exist in different metastable states, which are primed towards distinct lineages by subtle transcriptome modulations. While transitions between these stages are possible in the multipotent state, reinforcement of a primed state by random fluctuations or signaling events drives the cell into terminal differentiation. We explore the molecular mechanisms underpinning the transition from a multipotent state, exhibiting plasticity, to a lineage-restricted committed state. We have a particular focus on the role of gene expression noise in this process.

To understand how gene expression is regulated during differentiation of a stem cell into all its daughter cell types one has to be able to discriminate distinct cell types and states in a complex mixture, such as a tissue or an organ. The established approach is profiling sub-populations of cells purified based on only a handful of marker genes. This pre-selection imposes strong constraints on the resolution of cell types. Moreover, measuring gene expression in populations of cells masks the true distribution of gene expression levels across cells. 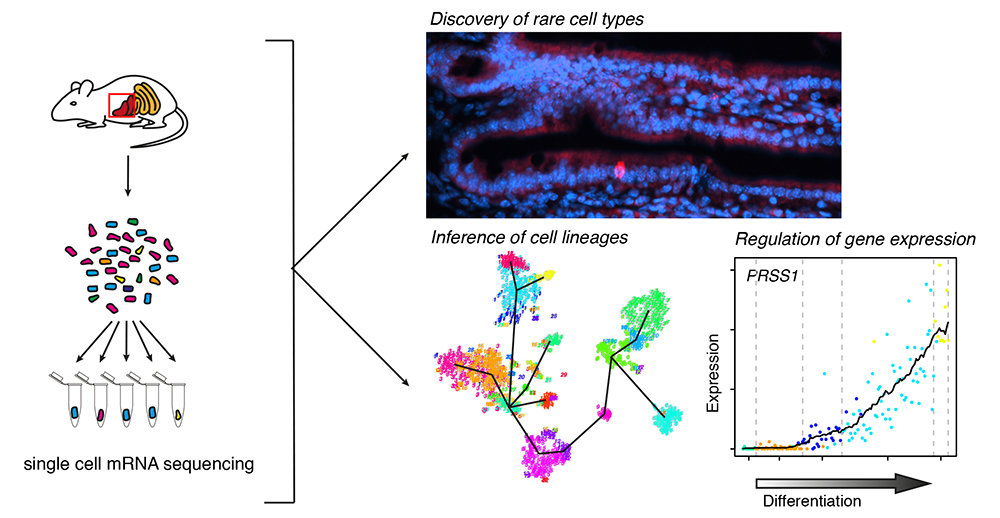 Fig. 2 Single cell mRNA sequencing is performed on randomly sampled cells from an organ to discover cell types and infer lineage trees. Mechanistic models of gene regulation during differentiation can be derived from these data.

Fig. 2 Single cell mRNA sequencing is performed on randomly sampled cells from an organ to discover cell types and infer lineage trees. Mechanistic models of gene regulation during differentiation can be derived from these data.

Single cell profiling, on the other hand, reveals an unbiased sample of all cell types in a complex mixture. The transcriptome of a cell can be looked at as a fingerprint revealing its identity. We use single cell mRNA sequencing to investigate the transcriptome and other molecular readouts such as chromatin accessibility, DNA methylation, and genomic DNA. Our lab develops computational methods to infer cell types and differentiation trajectories from these data with the goal to derive high-resolution lineage trees and to understand dynamics of gene expression during cellular differentiation. We are particularly interested in rare cell types, since those are oftentimes overlooked and can have crucial functions. For example, the stem cells themselves often occur at low frequencies.

Our strategy allows us to derive lineage trees de novo and to infer models for cell differentiation in a diversity systems. Moreover, marker genes for cell types and states can be identified with high specificity, which permits the purification of these cells and subsequent population based assays, e. g. ChiP-seq, to measure epigenetic marks and transcription factor binding. The ultimate goal is the derivation of a mechanistic model of gene regulation during differentiation by combining these population-based measurements with single cell gene expression data.

We are also elucidating the impact of a cells’ microenvironment by high-resolution spatial gene expression analysis. To this end, we employ spatial transcriptomics and imaging based analysis utilizing single-molecule FISH.

The role of biological gene expression noise during cellular differentiation

A specific focus of the lab is on the role of gene expression variability across single cells during differentiation. It has been shown that transcription is frequently not a continuous process but happens in bursts. This induces substantial cell-to-cell variability of mRNA levels, and the role of this so-called biological noise during cellular differentiation is not well understood.

Differentiation has to be a robust process with spatial and temporal precision and mechanisms for the control and utilization of gene expression noise are likely to exist.

Using single cell transcriptomics in conjunction with population based assays we try to elucidate how biological gene expression noise changes during differentiation and how it is mechanistically regulated. Since single cell sequencing still suffers from substantial technical noise we also utilize microscopic imaging of individual mRNAs in single cells (single molecule FISH) to investigate gene expression variability with high specificity and sensitivity.