The formation of the sex in mammals and other species is controlled by two special chromosomes – X and Y. Females have two X chromosomes, whereas males possess one X chromosome and the much smaller Y chromosome. In flies, the MSL complex has emerged as a molecular balancing mechanism to ensure the same amount of gene output in both sexes. Researchers of the Max Planck Institute of Immunobiology and Epigenetics in Freiburg now discovered the evolutionary origin of this epigenetic phenomenon called dosage compensation. For the first time, they were able to show that the MSL complex also controls essential developmental genes on other chromosomes. The team lead by Asifa Akhtar suggests that the origin of the MSL complex lay in the regulation of these developmental genes and was later reused also to regulate dosage compensation.

Humans have two sets of each chromosome, which are inherited from father and mother, respectively. It has to be ensured that genes on these chromosomes are read equally to generate the same amount of output. If not, in phenomena such as Haploinsufficiency, aneuploidy or other forms of chromosome abnormality, these gene dosage alterations can cause severe defects ultimately resulting in developmental failures and disease.

The sex chromosomes are one remarkable exception. While females have two X chromosomes in their somatic cells, males possess only one X and one copy of the Y chromosome, which contains only very few genes. To buffer the copy number differences between the sexes, humans, fruit flies as well as many other organisms rely on an epigenetic mechanism called dosage compensation.

In the early embryonic development of a female mammal, one of the two X chromosomes is inactivated so that its genes are not read twice as often as in males. Flies do the opposite: if they are male, the genes on their X chromosome are read twice as much as in females.

Searching for the roots of the MSL complex

In recent years, the laboratory of Asifa Akhtar at the Max Planck Institute of Immunobiology and Epigenetics (MPI-IE) in Freiburg has been able to gain numerous insights into this epigenetic balancing mechanism that is important for dosage compensation. They studied how exactly a group of proteins and non-coding RNAs, namely the MSL complex increases the gene expression of the single X chromosome in male flies to achieve the same dosage as XX females.

Interestingly, the MSL complex is also present in mammalian cells. But instead of up-regulating the transcription of one entire X chromosome with several hundred genes, here it only targets individual genes. “We always wondered how dosage compensation as a process to equalize gene expression of one entire chromosome could arise in the evolution of these insects,” explains Asifa Akhtar the main motivation of the study.

A key to answering this question was, that instead of using usual cell culture systems the team started studying the MSL complex in the larval stadium of the flies. Surprisingly here, they found that the MSL complex not only binds to the X chromosome but also to more sites of the genome located on other chromosomes. “These newly found MSL-linked sites in the genome were practically exclusively genes that control fly development and have a direct impact on cellular processes involved in organ formation,” For example, we observed malformed wings or diminished eyes indicating that the MSL complex is directly regulating genes such as Wingless, which is a master controller of development,”  says Claudia Keller Valsecchi, first author of the study. 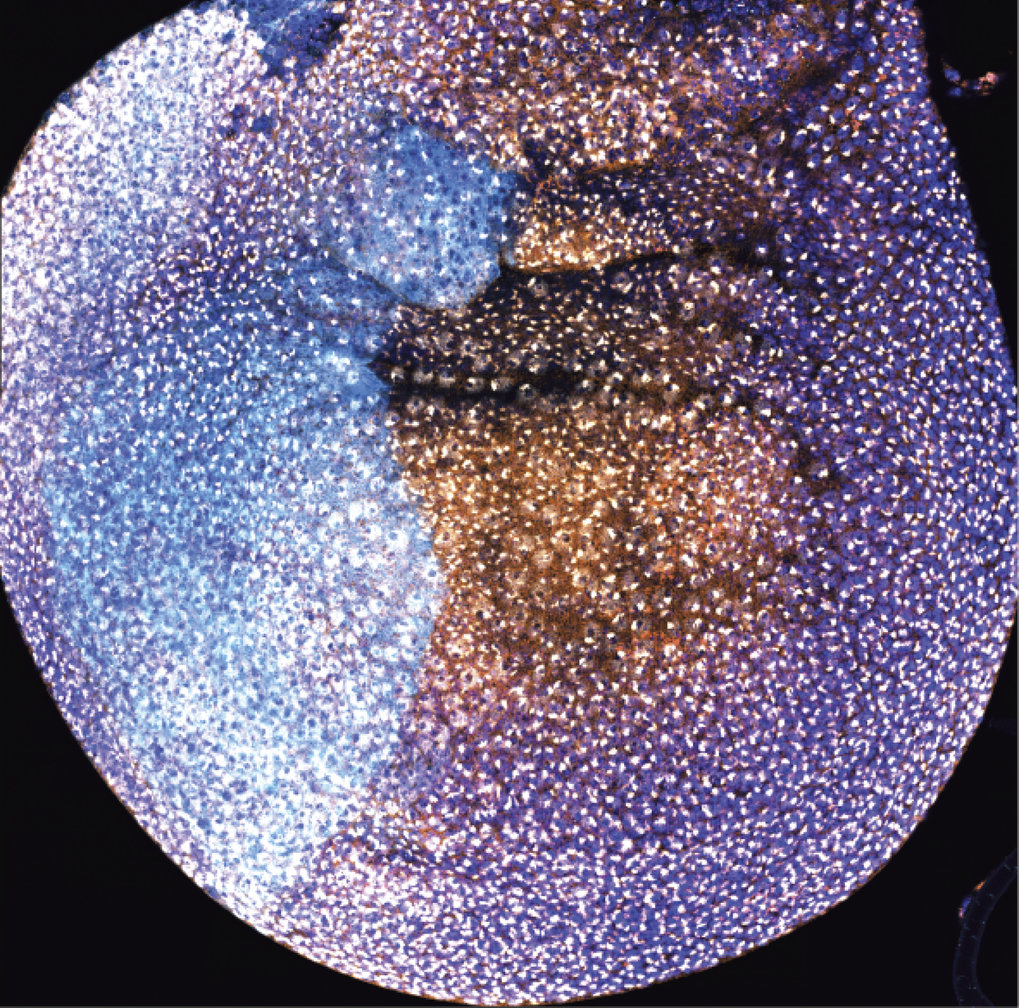 Fig 1 Color play in the wing mini-organ (disc) of a male fruit-fly larvae.  Immunofluorescence indicates the presence and activity of the MSL complex. The nuclei of the future wing (dark blue) and areas in which the scientists have removed components of the complex (light blue) or areas where they are still present (orange) are clearly visible. The white dots represent acetylation marks (H4K16ac) and show the researchers the extensive activity of the complex.

Fig 1 Color play in the wing mini-organ (disc) of a male fruit-fly larvae.  Immunofluorescence indicates the presence and activity of the MSL complex. The nuclei of the future wing (dark blue) and areas in which the scientists have removed components of the complex (light blue) or areas where they are still present (orange) are clearly visible. The white dots represent acetylation marks (H4K16ac) and show the researchers the extensive activity of the complex.

By a joint effort of the lab working with multiple experimental approaches and model organisms on different aspects of the MSL complex, the team was able to expand the already known functions of the complex beyond fly genome. Using CRISPR/Cas9 technologies the researchers succeeded in specifically switching off the Msl2 gene, a component of the MSL complex, in mouse stem cells. "Since these extremely important developmental genes have been conserved in evolution, we bet on the fact that genes such as Wingless must also be regulated by the complex in mammals,” says Felicia Basilicata. And the researchers were right in their assumption: the typical balancing mediated by the MSL complex was also found in the same developmental genes in mice.

Reallocation of the MSL function during evolution

“The regulation of exactly these genes that control development in flies as well as mammals was extremely exciting. It provided us with new facet of this epigenetic regulator illuminating the possible evolutionary link we tried to discover. We suggest that the evolutionary origin of the MSL complex lies primarily in the regulation of these developmental genes in multicellular organisms. The MSL function later have been proven to be »practical« in the evolution of flies and was then »reused« to regulate the X chromosome and dosage compensation,” summarizes Plamen Georgiev, co-author and head of the MPI-IE fly facility.

In future studies, the researchers want to find out how this reallocation was possible at the molecular level. They suggest that individual parts of the complex have been adapted or slightly modified in evolution, which then allowed for the regulation of the entire X chromosome in flies.