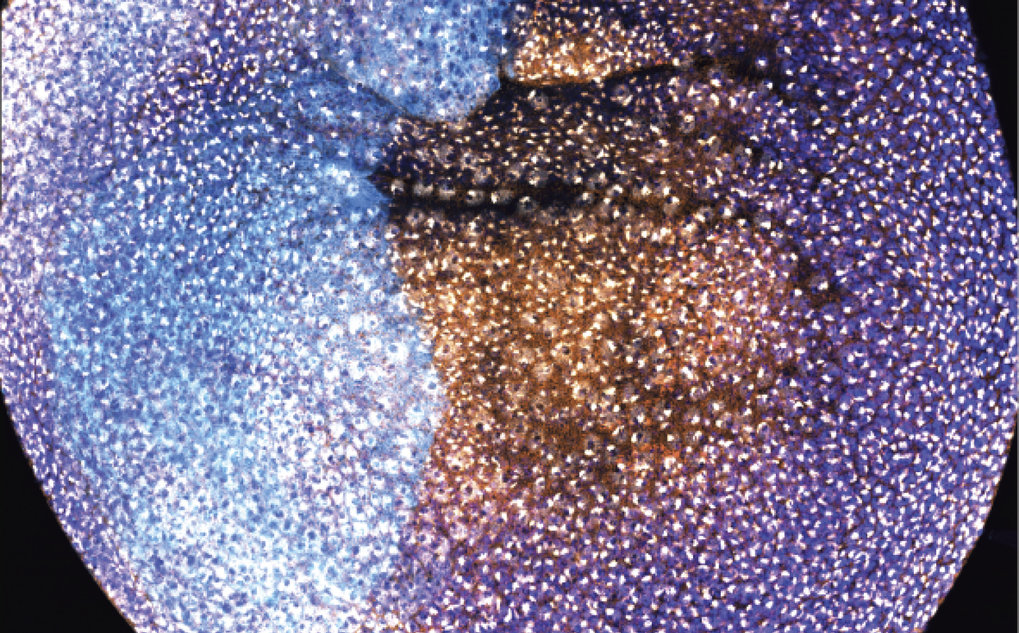 Fruit flies make up for the imbalance in the number of X chromosomes between the sexes at the start of transcription. [more]

Scientists discover cause of rare syndrome

Changes in the MSL3-gene lead to neurological and developmental dysfunctions

Research into rare diseases has received a decisive boost in recent years thanks to new high-throughput sequencing methods and platforms for exchange between researchers and treating physicians. In cooperation with French colleagues from the University of Dijon and doctors worldwide, a team at the Max Planck Institute of Immunobiology and Epigenetics in Freiburg has succeeded in clarifying the causes of a rare syndrome. Children affected by this syndrome suffer from severe developmental delays and progressive neurological dysfunctions. The researchers were able to show that mutations in the MSL3 gene lead to a misregulation of epigenetic mechanisms that control central genes during embryonic development. The study also showed a promising path for future epigenetic therapies in cell culture that could alleviate the course and severity of the syndrome in patients.

The postgenomic era has revolutionized the diagnosis of previously mysterious symptoms and diseases. Next generation sequencing technologies allowed the identification of myriads of new mutations linked to human diseases. This has provided a turning point for the orphans of medicine: The rare or ultra-rare diseases, where only a few hundred people worldwide are affected. In many instances these patients show very complex and diverse symptoms and usually lack any treatment options.

Research into the molecular basis is therefore of fundamental importance, as it may help in taking preventive measures as well as pave ways towards repurposing of already approved drugs for these rare cases. Collaboration between scientists and clinicians are therefore absolutely necessary for an in-depth understanding of these diseases, that have been neglected for a very long time. Now researchers at the Max Planck Institute of Immunobiology and Epigenetics in Freiburg in cooperation with clinicians from Dijon have succeeded in bringing light to a previously unknown syndrome, in which affected children undergo severe developmental delays and progressive neurological dysfunction.

Asifa Akhtar, director at the Freiburg Max Planck Institute and a leading expert in epigenetics, was contacted by the clinician Julien Thevenon from Department of Medical Genetics at the Dijon University in France. Through next generation sequencing, he had found that the reason for a neurodevelopmental syndrome in one of his infant patients was caused by a mutation of a gene called MSL3. To better understand the impact of such a mutation in humans, Asifa’s expertise was instrumental. “At this point, it was also essential to find further unrelated individuals with mutations in the same gene to confirm my diagnosis,” says Julien Thevenon, co-corresponding author of the study.

Through the Matchmaker Exchange, a platform connecting clinicians and researchers with rare cases from all over the world, Thevenon was able to find fifteen more patients from the United Kingdom, France, Germany, Netherland, Denmark, Estonia, Belgium, US, Australia. All of them manifested similar symptoms and also presented alterations of the MSL3 gene. “The fact that we have been studying MSL3 gene for several years using different model organisms provided a major stepping stone for us to now begin the daunting task to unravel, why and how loss of MSL3 function contributes to human disease”, says Asifa Akhtar.

The proteins encoded by MSL genes, for example MSL3, act like a volume regulator of a radio: They are able to precisely activate a gene to its appropriate level. In long-standing studies, the laboratory of Asifa Akhtar showed how the MSL proteins team up in the so-called MSL complex, which can regulate the entire X chromosome in flies, but also fine-tune individual genes in mammals. “The complex phenotype of the patients indicated to us that MSL3 could play diverse roles during development”, says Felicia Basilicata, lead author of the study.

The scientists were fortunate that some of the patients agreed to donate skin biopsies for the molecular research, which allowed the team to perform histological studies and establish cell culture models. This was crucial to dig deeper into the molecular mechanisms that may have caused the progression of the syndrome. In their experiments, the team found that as part of the MSL complex, the MSL3 protein is essential to boost the activity of the enzyme MOF, another part of the complex. This enzyme marks specific genes and makes them more accessible for the machinery that reads these genes. “The mutations we observed in the MSL3 gene of the patients caused misregulation of the enzymatic activity of the MSL complex. The impaired function of this epigenetic regulator, in turn, results in diminished levels of epigenetic marks and the consequent reduction of numerous biologically relevant genes including key developmental regulators leading to the global disease state of the MSL3 syndrome patients,” summarizes Asifa Akhtar the consequences of the mutated gene.

But the findings of the team also give a reason for hope: Genetic mutations permanently alter the genome. In contrast, epigenetic alterations, whether they are driven by changes in genome, such as in MSL3 syndrome, or by environmental influences such as stress, aging or nutrition, can potentially be pharmacologically reversed or at least modified. This provides the promise of bypassing the compromised function of the MSL complex in patients diagnosed with MSL3 syndrome.

The Freiburg researchers had the idea to test compounds known to increase the acetylation marks in the cells. These chemicals were originally established for anticancer therapy and had just recently completed first clinical trials. “Our results were astonishing. We applied so-called histone deacetylase inhibitors to MSL3 syndrome cells and saw an improvement in the treated cells - both at the molecular and at the cellular level,” says Felicia Basilicata.

Although the approach was only tested in cultured cells, it provides a preliminary, yet promising ground for further research on new treatment options. “We hope that by identifying the cause and underlying molecular mechanisms of the disease, as well as providing a first approach to alleviate at least some of the symptoms of MSL3 patients, we paved the way for impactful future studies that can help patients with MSL3 syndrome or even comparable diseases affecting epigenetic modifiers,” says Julien Thevenon. “Our study is a great example of how an integrative approach of molecular scientists and clinicians working hand in hand is extremely powerful to unravel the fundamental mechanisms required for understanding human diseases“, concludes Asifa Akhtar.