Science is a cooperative venture, and large-scale project are usually tackled by more than one institute or research group. In many of our research projects we collaborate with local, national and international partners to join our knowledge, talent and experience.

From collaborations between researchers on a single project, to large coalitions with other research organisations in clusters and research centers, the MPI of Immunobiology and Epigenetics has a local and global outlook.

Close working relationships traditionally exist with laboratories in Freiburg. The institute is an integral part of the local research community for over 50 years. It has long-standing collaborations with the University of Freiburg and its associated Medical Center. This partnership is reflected in the very successful cooperation regarding the joint University/MPI-IE Department of Molecular Immunology that conducted ground-breaking research at the institute from 1996-2017. With the establishment of the joint University/MPI-IE Laboratory of Immunometabolism in 2015, the MPI-IE was able to continue this partnership.

Since 2005, the Excellence Initiative has been strengthening the University of Freiburg as a center of higher education and science by providing targeted funding for top-level research. The MPI-IE is significantly involved in the following Clusters of Excellence that build on the collaborations between the two research institutions:

Collaborative Research Centers (CRCs/SFB) are long-term university-based research institutions funded by the DFG. CRCs consist of a large number of projects to tackle innovative, challenging, complex and long-term research undertakings. Scientists of the MPI-IE take part with own projects in various CRCs located at the University of Freiburg and cooperate in pursuit of a joint research aim. Learn more about local and nationwide CRC partnerships. 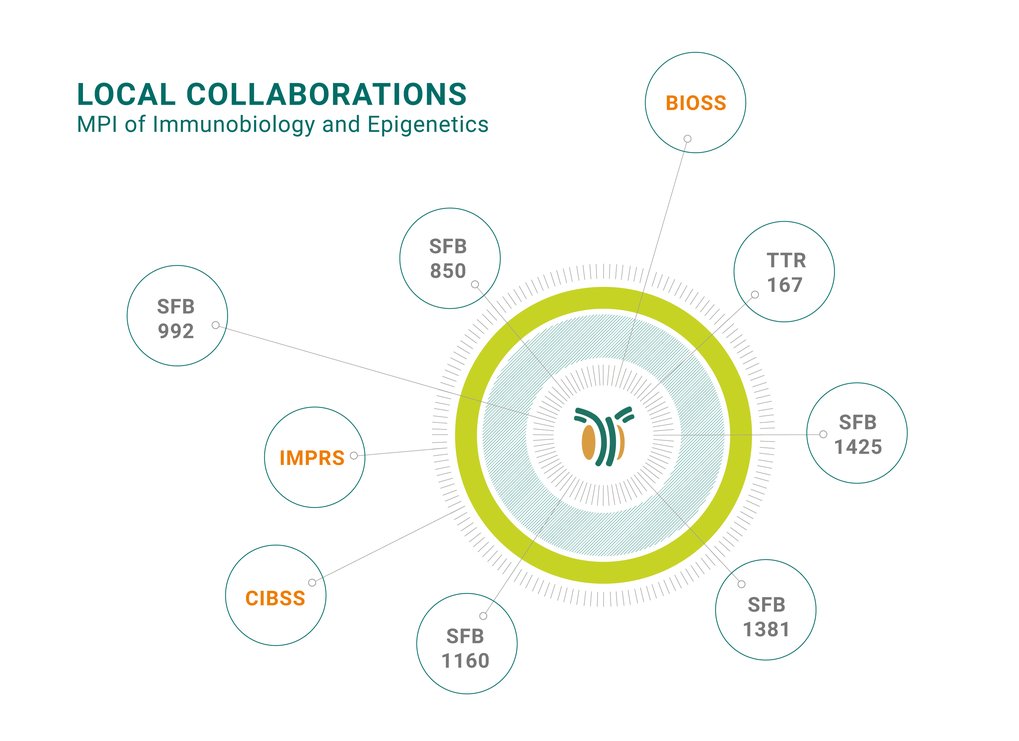 Another major focus of the interactions between the MPI-IE and the University of Freiburg is the education of young scientists. Group leaders are usually affiliated with the Faculties of Biology or Medicine and involved in active teaching, mainly at the graduate level (e.g., Oberseminare, Introductory lecture series on epigenetics). The best example of this successful partnership is the International Max Planck Research School of Immunobiology, Epigenetics and Metabolism (IMPRS-IEM) hosted at the MPI-IE in collaboration with the University of Freiburg since 2006. Moreover, MPI-IE research groups joint the faculties of other graduate schools at the university, such as the Spemann Graduate School or the MeInBio Ph.D. program. Learn more about our educational partnerships.

The European Research Council (ERC) is a public body established by the European Commission for funding of scientific research conducted within the European Union. With different funding lines the ERC supports top researchers in the advancement of basic research and visionary projects. As a testament of scientific excellence of its researchers and their projects, the institute has been awarded more than 10 ERC grants since the 2007. Read more about the individual ERC projects.

International cooperations promote scientific performance and productivity. The MPI-IE operates worldwide on projects. Our collaborations in Europe, Japan, and the United States build not only personal bridges for our scientist but also add scientific value, of which all research projects can benefit. Read more about our international cooperations.