Epigenetic modifiers govern gene activity by modulating the accessibility of DNA. A prime example, the NSL complex, is known to regulate thousands of genes in flies and mammals. Researchers from the Max Planck Institute of Immunobiology and Epigenetics (MPI-IE) in Freiburg and the Center for Genomic Regulation (CRG) in Barcelona have now uncovered that three NSL complex members fulfill an important additional function in mitosis. The KANSL proteins bind and stabilize microtubules, the building blocks of the mitotic spindle, making them essential for correct spindle assembly and faithful segregation of the genome. This study showed that the NSL complex juggles two distinct jobs in different stages of the cell cycle.

Proliferating cells undergo two stages during their “life cycle”: in interphase genes are actively transcribed and the genetic material is duplicated. In mitosis, when the mother cell divides, the chromosomes are partitioned or ‘segregated’ to create two daughter cells with the same genetic information. It is crucial for the cell’s survival that both processes (gene expression and chromosome segregation) are tightly regulated.

Gene activity during interphase is controlled by a large set of epigenetic regulators. These factors modulate the structure of chromatin (the physiological form of DNA) and thereby switch genes on or off. The Akhtar laboratory at the MPI-IE previously identified the NSL complex as a potent epigenetic modifier that regulates more than 4000 genes in both flies and humans. “At this point we have a pretty good understanding of how the NSL complex functions as a transcriptional regulator in interphase. Now we were curious to explore how the complex may behave in other stages of the cell cycle,” Dr. Asifa Akhtar explains the rationale for their new study. 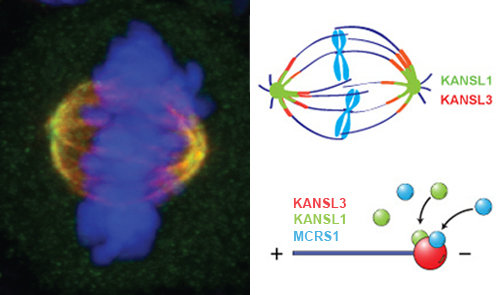 Zoom Image
Fig 2: KANSL proteins, how NSL proteins are called in mammals, localize to the poles of the mitotic spinde.

Left panel: ... [more]
Fig 2: KANSL proteins, how NSL proteins are called in mammals, localize to the poles of the mitotic spinde.

Left panel: Immunofluorescence of the mitotic spindle. KANSL3 is shown in green, tubulin in red and DNA in blue. Overlaps between red and green appears as yellow.

Right Panel: Schematic representation of KANSL proteins on the mitotic spindle (upper half) and microbules.  [less]

Fig 2: KANSL proteins, how NSL proteins are called in mammals, localize to the poles of the mitotic spinde.

Left panel: Immunofluorescence of the mitotic spindle. KANSL3 is shown in green, tubulin in red and DNA in blue. Overlaps between red and green appears as yellow.

Right Panel: Schematic representation of KANSL proteins on the mitotic spindle (upper half) and microbules.

During cell division most epigenetic regulators are displaced from chromatin. When Maria Shvedunova, PhD student and co-first author, examined the localization of NSL complex members during the cell cycle she made an intriguing observation: while all complex members were nuclear in interphase, two KANSL proteins (KANSL1, KANSL3) moved to the poles of the mitotic spindle when cells were preparing to divide. The mitotic spindle is the mechanical scaffold, which attaches to chromosomes and pulls them apart during cell division. This was very exciting as the research team of Prof. Isabelle Vernos at the CRG in Barcelona recently showed that MCRS1, another member of the NSL complex, also localized to spindle poles during mitosis. These results indicated an additional role for KANSL proteins in chromosome segregation. Indeed, cells lacking even one of the three proteins could not divide properly.

To further explore the molecular mechanism of KANSL proteins during cell division, the Akhtar laboratory therefore teamed up with Prof. Isabelle Vernos and Dr. Sylvain Meunier at the CRG Barcelona. Elegant experiments in the test tube demonstrated that KANSL proteins bind and stabilize microtubules, the building blocks of the mitotic spindle. In particular, KANSL3 displayed an interesting binding behavior – it specifically recognized the minus end of microtubules. “For the microtubule field this is an extremely interesting finding. So far there is only one additional protein with this binding property,” explains Maria Shvedunova.

This study has changed the view of researchers on the NSL complex. “We were surprised to learn that the NSL complex has two distinct functions during the cell cycle – it ensures the controlled expression of our genetic information in interphase and the faithful segregation of our DNA in mitosis. This finding has certainly opened up a new line of research for my laboratory,” says Dr Asifa Akhtar. The researchers plan to address open mechanistic questions such as: How does KANSL3 interact with microtubules? What are the other members of the NSL complex doing in mitosis? In the long run a better understanding of the “double role” of the NSL complex might even provide insight into the causes and underlying mechanisms of KANSL-associated diseases such as cancer and mental retardation.