MaxPlanckResearch is the science magazine published by the Max Planck Society. In-depth researched science journalism four times a year and free of charge by subscription or as an eMagazine. Completely in English. 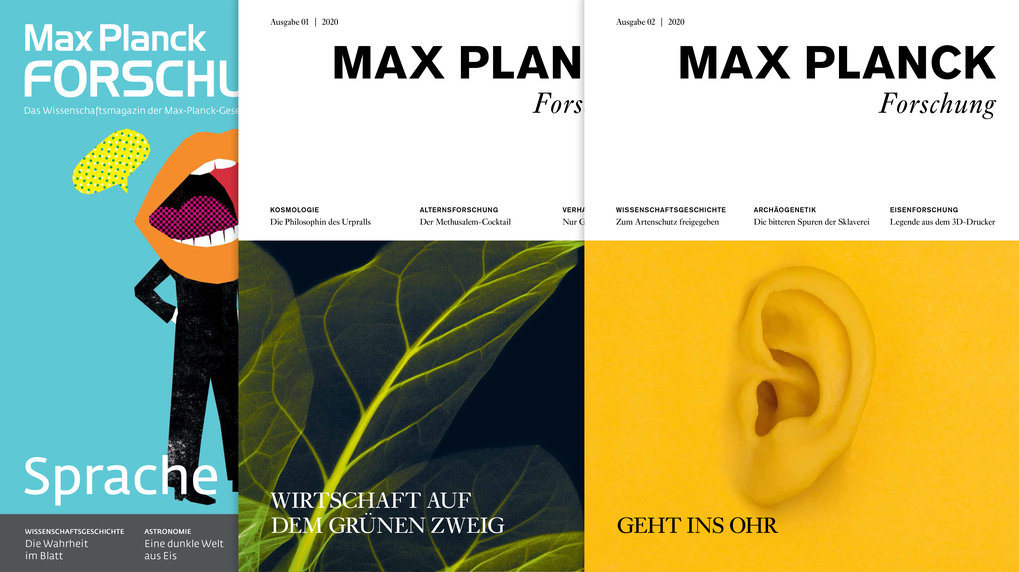 The scientific magazine of the MPG covers current research at its institutes. The magazine is published quarterly in English and German and comes free of charge.

The science magazine MaxPlanckForschung has a long tradition: For more than three decades, it has been mirroring the research at the Max Planck Institutes – always up-to-date, vibrant and easy to understand.

Published four times a year in German and English, the magazine aims to present scientific topics understandably. In addition to short topical reports and sections on Physics & Astronomy, Biology & Medicine, Matter & Material, Environment & Climate, and Culture & Society, every issue contains a special focus on a specific subject. The articles cover all areas of current fundamental research – from cosmic objects on the frontiers of space and time through ecological and social systems, to the molecular and atomic structures on which the inanimate world is based.

Subscribe to MaxPlanckResearch free of charge. Besides, it is possible to download the entire magazine as a PDF after publication or use the eMagazine for easy-access on your tablet or smartphone. Videos, animations, and podcasts supplement the digital eMagazine on the respective topics in the magazine.

Read selected articles about the Institute’s research in MaxPlanckResearch.


MPF 2011, 2
Research into epigenetics is a rapidly growing field. A recent conference at the Max Planck Institute of Immunobiology and Epigenetics in Freiburg shed light on the reasons. The new science investigates permanent biochemical switches that control genetic activity. These switches give a cell its identity and memory. They are what enable organisms to develop and adapt to their environment.


MPF 2016, 2
In the mid-1970s, Georges Köhler, later Director at the Max Planck Institute of Immunobiologyin Freiburg, succeeded in fusing together a short-lived immune cell and a rapidly dividing cancer cell. The result was an immortal cell chimera with the ability to produce identical (“monoclonal”) antibodies, ushering in a revolution in biology and medical science. In 1984, Köhler was awarded the Nobel Prize along with César Milstein and Niels Kaj Jerne. The researcher, who died young, would have celebrated his 70th birthday this year.