How genes are shut down during stress [more]

Under stress conditions, cells switch quickly from the normal to the crisis mode to prevent themselves from being damaged. This so-called heat shock response is associated with a rapid downregulation of gene activity to release capacities to cope with the threat. Researchers at the MPI of Immunobiology and Epigenetics in Freiburg have now discovered how exactly a stress-induced molecular droplet formation of the transcription regulator NELF downregulates transcription to promote cell survival upon stress.

All life on earth evolved multiple layers and networks of ensuring survival upon catastrophic events. Even cells have their emergency plan: the heat shock response. Triggered by multiple stress stimuli such as heat, toxins, or radiation, this cellular safety program tries to prevent permanent damage to the organism. The response resembles an overall adopted “lockdown” strategy witnessed during the global corona virus pandemic. During a lockdown, only essential activities are permitted and resources were diverted towards measures ensuring minimizing the impact of a pandemic.

Under normal conditions, RNA polymerase II rushes down the DNA. At the correct places, the DNA is transcribed into mRNA, which is then translated into proteins. In a crisis, however, this transcription activity must come to a standstill, for the most part, to shut down or minimize the production of proteins not essential during stress conditions. “This move releases necessary capacities to ramp-up the production of RNA and proteins called molecular chaperones, which help to cope with the threat and effects of stress. The question remains, how to place an entire cell under lockdown?” says Ritwick Sawarkar, group leader at the MPI of Immunobiology and Epigenetics and the University of Cambridge. 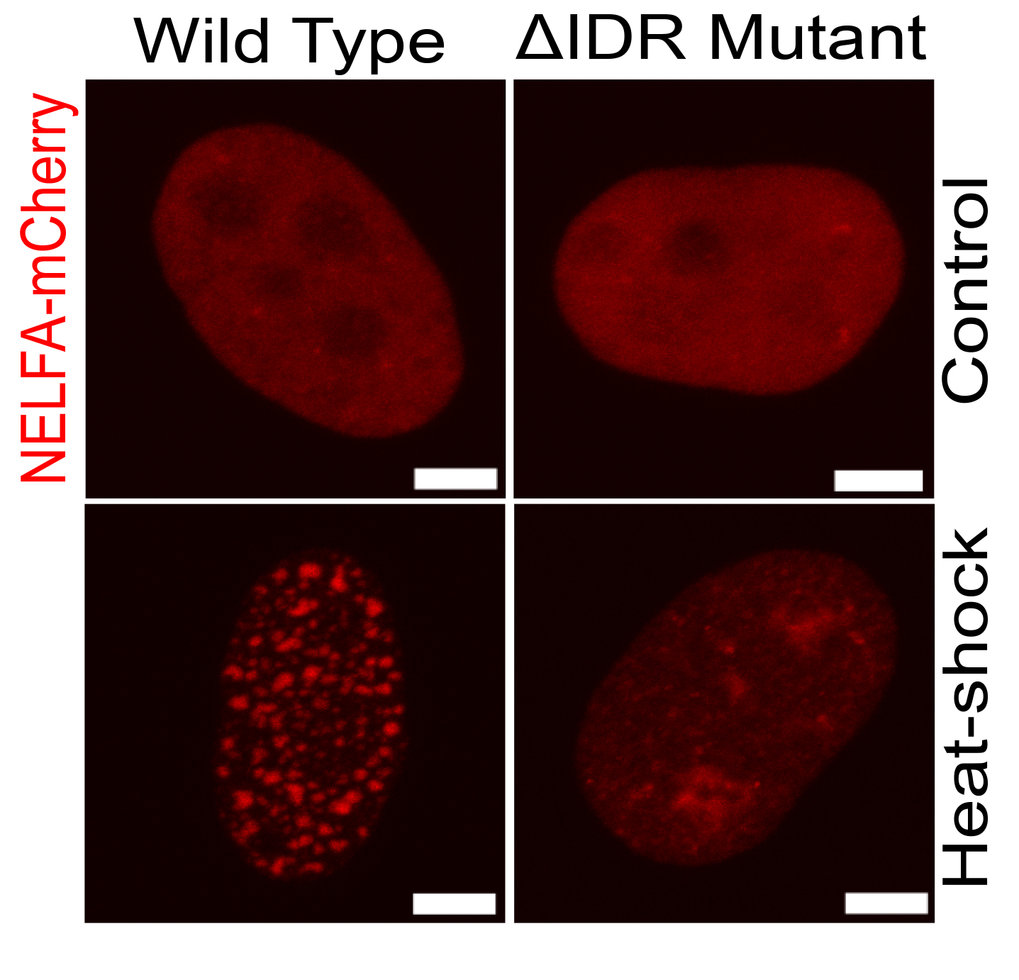 Earlier studies by the Sawarkar lab gave first insights what happens in the cells, when they switch from normal to emergency. Stress causes the accumulation of the negative elongation factor (NELF) in the nucleus and stops the transcription at a vast number of genes. But how exactly the transcriptional regulator NELF executes the so-called Stress-Induced Transcriptional Attenuation (SITA) remained unknown.

“At the start of this project, we tried to visualize the NELF protein with live-cell imaging to understand its role and regulation better. Surprisingly, we discovered that NELF forms puncta or droplets upon stress whereas the same protein remains diffused under no stress conditions. We called these droplets NELF condensates”, says Prashant Rawat, first-author of the study. Together with the Lab of Patrick Cramer at the MPI for Biophysical Chemistry who could recapitulate the same NELF droplets in vitro with recombinant purified proteins, the teams propose that the stress induced biomolecular condensation facilitates an enhanced recruitment of NELF to the promoter regions of genes. Here, the NELF droplets presumably block the activity of the polymerase and drive the downregulation of gene expression.

NELF subunits contain so-called Intrinsically disordered regions (IDRs). IDRs are the parts of proteins with no fixed structure and act as tentacles. The Max Planck scientists were able to show that interactions between the NELF tentacles are essential for condensation. “Many individual NELF molecules come together and their tentacles engage strongly together to form the droplet just like holding each other’s hands. But what puzzled us the most was that NELF always contains IDRs as part of their structure but only undergoes condensation upon stress,” says Prashant Rawat. 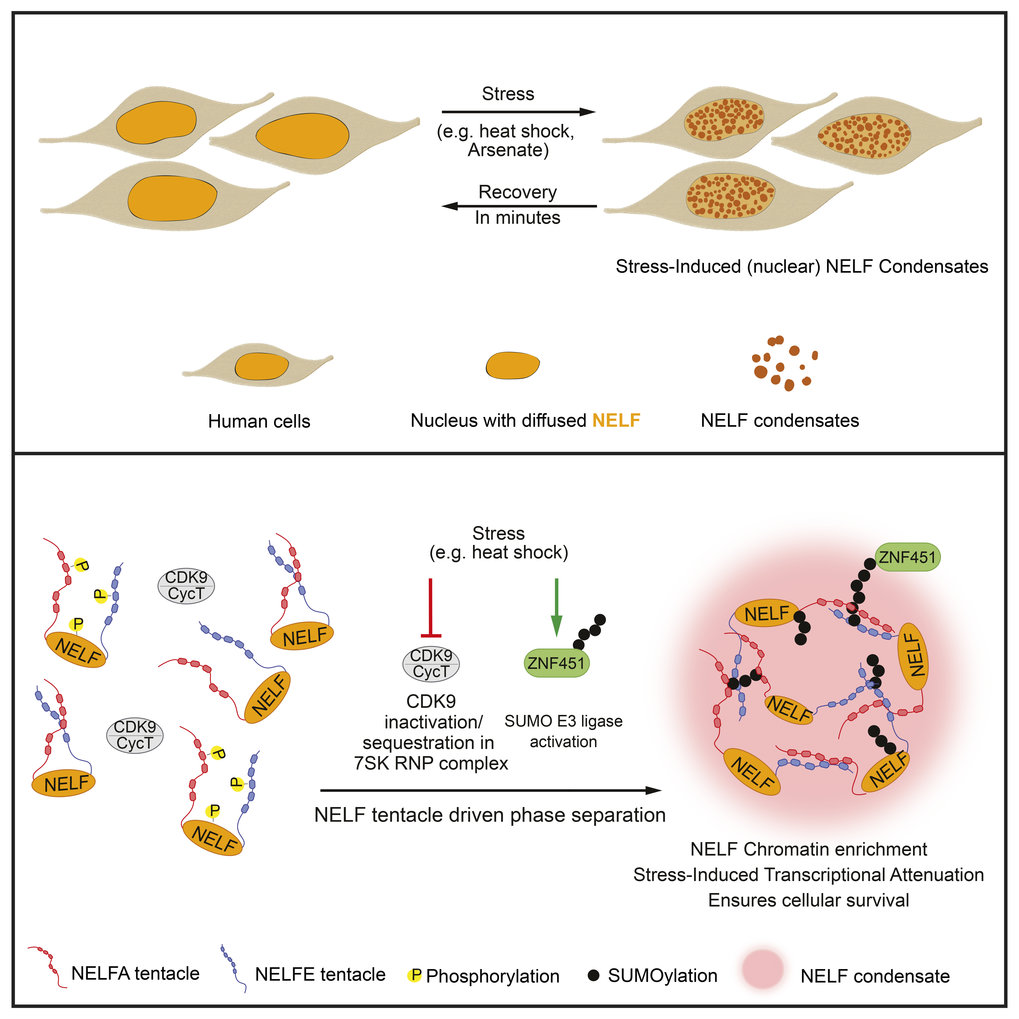 Cells failing to form the NELF droplets because of impaired IDR or SUMOylation deficiency also fail to downregulate the genes and transcription upon stress. “If cells fail to go under lockdown by NELF condensation and transcriptional downregulation they risk their fitness. Our data shows significantly higher death rates of cells lacking a proper NELF condensation during stress,” says Prashant Rawat.

For Ritwick Sawarkar, these results also highlight the collaborative aspects of life at Max Planck Institutes. “This research only became possible because of close cooperations. Not only the collaboration with Patrick Cramer's lab at the MPI-BPC in Göttingen gave important input, but also Andrea Pichler’s lab at the MPI-IE in Freiburg was central in clarifying the role of SUMOylation in NELF condensation,” says Ritwick Sawarkar, lead author of the study.

Stress-induced transcriptional downregulation is already speculated to be associated with neurological disorders like Huntington. “We have already generated mouse models at the institute to extend our findings in vivo and to relevant disease models,” says Prashant Rawat. The possibility of exploring the role of NELF condensates in different diseases seems to be an exciting avenue for future research in the lab.