We found that the nuclear proteins Satb1 and Satb2, which function as determinants of higher-order chromatin structure, have opposing roles in the regulation of the pluripotency gene Nanog. In particular, Satb1 represses Nanog, whereas the closely related Satb2 protein activates Nanog.

Moreover, both Satb1-deficient ES cells and wild-type ES cells in which Satb2 is overexpressed are more efficient in reprogramming human B lymphocytes in heterokaryon fusion experiments.

Currently, we are examining whether or not the balance of Satb1 and Satb2 expression and/or the SUMOylation of Satb2 contributes to the heterogeneity of ES cells in the expression of pluripotency genes. Satb2 also plays a role in B lymphocytes by determining the higher-order chromatin structure of the immunoglobulin heavy chain (IgH) locus. We found that Satb2 is bound in vivo to AT-rich sequences that flank the intronic IgH enhancer. 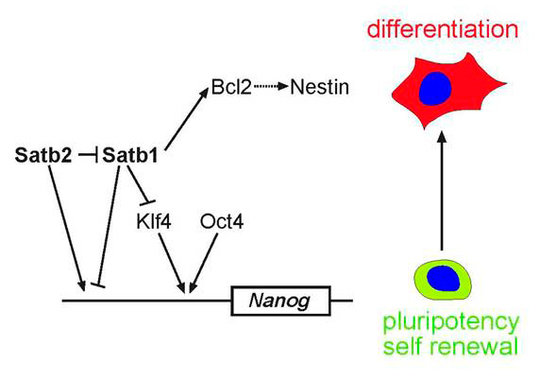 By studying the subnuclear localization and higher-order chromatin structure of the IgH locus in Satb2-deficient pro-B cells, we anticipate to unravel the molecular basis of Satb2 function in the regulation of higher-order chromatin structure. By combining biochemical, imaging and genetic approaches, we are interested in elucidating how Satb proteins functionally organize chromatin via looping and how these proteins contribute to changes in epigenetic marks during stem cell differentiation.