Mice are lifesavers, because mice and humans carry a large number of similar genes, molecular processes are subject to comparable control mechanisms and, last but not least, mice get cancer or diabetes just like humans. This is why the use of mice has led to an enormous gain in knowledge in biomedicine to date.

Why the mouse? | Our mouse husbandry | Research with mice at the Institute

The mouse is by far the most frequently used mammal for animal experiments worldwide. While the initial focus was on cancer, almost all biomedical disciplines currently work with the mouse. Accordingly, the discoveries associated with the rodent are extremely numerous. But especially in the field of immunobiology, many successes would hardly have been conceivable without the mouse as a model organism: the role of antibodies in resistance to pathogens, the principle of immune tolerance to the body's own tissue, vaccine development or the development of monoclonal antibodies and much more are based, among other things, on research with mice.

Compared to other animals used at our institute, the mouse, as a mammal, is most closely related to humans. The mouse provides an excellent model for human diseases, as many biochemical and cellular processes as well as its reproductive and nervous systems are very similar to those of humans. The animals can also suffer from the same diseases, such as cancer, diabetes and neurological disorders. The close relationship between mice and humans makes processes in the cells, for example in cancer development or in the development of the immune system, fundamentally comparable.

This close biological relationship with humans explains the prominent role of the mouse in biomedical research. Many known infectious diseases are zoonoses, which means they can be transmitted from mice to humans and vice versa. On this basis, many effective vaccines and drugs for humans and animals have already been developed with the help of mice. Diagnostic tests and therapies for genetic diseases and their causes have also been developed with the help of mice.

Much of what we know today about human diseases and what therapies have been developed is largely based on studies with animals. The great similarity between mice and humans means that many of the diseases in both species often have a comparable genetic cause. But research with mice has also made decisive contributions to deciphering the complexity of mammalian development and cell differentiation. 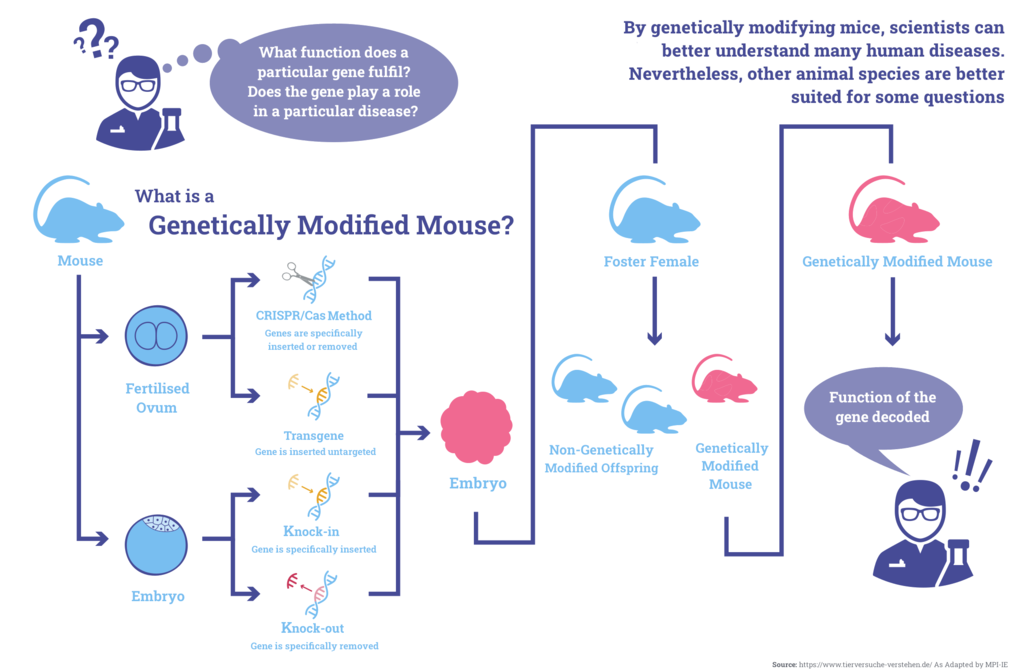 With the help of genetically modified animals, animal studies on human diseases can become even more meaningful. Genetically modified animals are created through targeted gene modification. Either genes are silenced (knock-out) or genes of the animal are replaced by a similar gene of the human genome (knock-in). If, for example, certain genes have been silenced in a mouse and diseases such as diabetes or obesity subsequently occur more frequently, then this indicates that the silenced gene or the epigenetic mechanism that silences the gene plays a role in the disease.

With the help of these techniques, science has already been able to determine the functions of countless human genes. Human hereditary diseases can also be simulated in animals using "humanised mouse models". These studies allow conclusions to be drawn about the causes of diseases and help to understand disease progression at the molecular level. They are often an important first step in the search for active substances for therapies.

The Understanding Animal Research info website explains in more detail which types of genetically modified mice exist and how they are used in research. Find further infographics in German by the initiative "Tierversuche verstehen".

Our husbandry for mice

The animals kept at the MPI-IE and used for experiments come either from our own breeding or from officially controlled breeders. When housing them, we ensure that the animals are appropriate to their species and behaviour. Mice, for example, are sociable and curious animals. They are therefore kept together in small groups wherever possible.

All animals are housed in transparent plastic cages that are equipped with bedding, food and water. In addition, the animals are provided with a mouse house and nesting material to keep them occupied and to enable them to behave in a manner appropriate to their species.

In our animal husbandry, we pay attention to standardised husbandry conditions so that experimental results are comparable. Therefore, all laboratory animals live under strictly controlled environmental conditions: Temperature, humidity, light/dark cycle as well as light and sound levels are optimally adjusted for the animals. Genetically modified mice with an impaired immune system are less able to fend off environmental germs and are additionally protected by specific barrier conditions. Specially trained staff take care of the animals in so-called specific pathogen-free high barrier areas (SPF).

All employees who enter the animal facility must observe extensive hygiene regulations and wear protective clothing. All work with the animals themselves is also carried out under strictly hygienic laboratory conditions.

Through these and other protective measures, e.g. the use of standardised protocols for the staff, we not only do everything for the well-being and health of our animals, but also ensure that no pathogens can escape from the animal husbandry areas to the outside.

A team of veterinarians, animal welfare officers and experienced animal caretakers look after the welfare of the animals and support our research projects at the Institute.