We are actually a lot closer to the bugs than we thought, at least epigenetically. The groups led by Andrew Pospisilik and Kevin Dalgaard published a paper in Cell describing how dysregulation of an imprinted gene network leads to both lean and obese phenotypes in individuals with the identical genotype

Obesity can sometimes be shut down

It is well known that a predisposition to adiposity lies in our genes. A new study by researchers at the Max Planck Institute of Immunobiology and Epigenetics in Freiburg now shows that it is also crucial how these genes are regulated. The scientists lead by Andrew Pospisilik discovered a novel regulatory, epigenetic switch, which causes individuals with identical genetic material, such as monozygotic twins, to either be lean or obese. Interestingly, much like a classical light switch there are only two discrete outcomes (ON and OFF, or rather OBESE and NOT OBESE), not continuous increments as with a dimmer. These new insights fundamentally alter our understanding of how epigenetics influences gene outcomes.

Our world has a weighty problem. About half a billion people are obese. Obesity is a risk factor for many secondary diseases such as cardiovascular problems, cancer and diabetes. Adiposity is largely controlled by our DNA, and, more recently appreciated, by our environment. 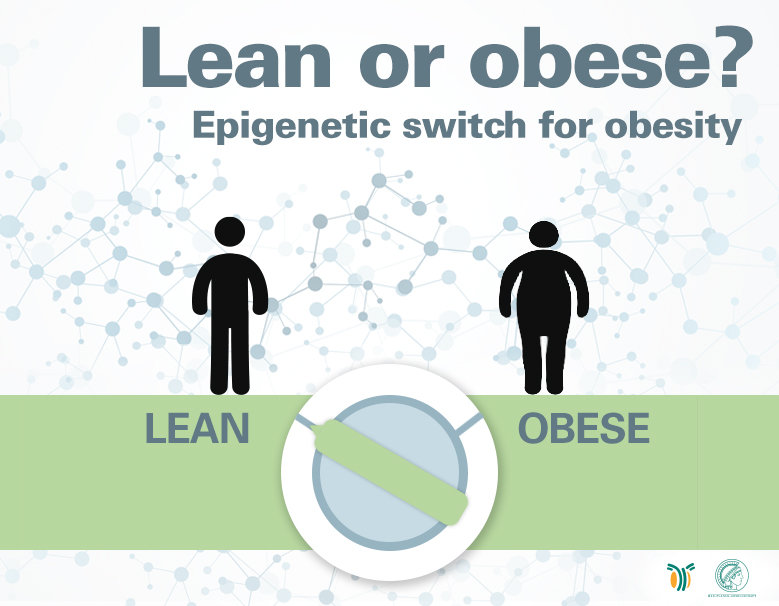 The group of Andrew Pospisilik at the Max Planck Institute of Immunobiology and Epigenetics is particularly interested in investigating such “epigenetic” effects in metabolic diseases. The starting point of their new study was a mouse strain in which only one of two copies of the gene Trim28 was present in the genome. Collaborators in Brisbane, led by Emma Whitelaw, had previously observed that these mice displayed large variations in their body weight despite being genetically identical. “We were intrigued by these findings. They suggested the possibility of a purely epigenetic disease”, Andrew Pospisilik says.

Either lean or obese

When looking at the weight distribution of large cohorts of genetically identical mice, the Max Planck researchers noticed something odd. The body weight of the animals wasn’t random, they came in two flavors, either lean or obese. “We were really surprised that the same genotype can lead to two very different but more importantly very stable phenotypes,” says Kevin Dalgaard, first author of the study.

By comparing global gene expression in the two populations, the team discovered a network of so-called ‘imprinted’ genes that was significantly lower expressed in obese animals. Imprinted genes are a small subset of genes, which are exclusively expressed from either the maternal or paternal gene copy. Working together with Cambridge teams led by Anne Fergusson-Smith, Steve O’Rahilly, Giles Yeo and Anthony Coll, the authors showed that loss of one copy of these imprinted genes also resulted in a ‘bi-stable’ distribution of either lean or obese animals. This confirmed the functional importance of the imprinted network and suggested that it acts like a switch between two distinct phenotypes.

“Once the switch is triggered, it is a lifelong, epigenetically-driven decision that ends in a stable, either a lean or obese phenotype" says Andrew Pospisilik and adds "Such clearly separated phenotypes have a genetic cause; here, though we found that the effect was non-Mendelian. The effect is akin to a light switch – on or off, lean or obese. Typically, we usually consider epigenetic control of disease to act much more like a dimmer, shifting phenotypes like body weight up or down gradually.”

With the goal of testing whether a comparable switch might exist in humans, the Max Planck researchers teamed up with Childhood obesity specialists Antje Koerner and Kathrin Landgraf in Leipzig, Germany, and began analyzing adipose tissue samples from lean and obese children. The results were intriguing. A subset of overweight children, about half of cohort, showed altered expression levels of TRIM28 and the network of imprinted genes, a signature that paralleled their observations in the mice. Exploring published data from identical twins discordant for obesity (i.e. where one twin was obese and the other lean), they found similar trends that supported existence of a similar epigenetic effect in humans.

First proof of polyphenism in mammals

“Our data not only help to understand the interaction of genetic and epigenetic factors in obesity and other diseases, they have implications for how we think about evolution” says Andrew Pospisilik. The phenomenon that an identical genotype can lead to clearly distinguishable phenotypes is known as polyphenism. A typical example in the animal kingdom is honeybees, where from the same DNA either a queen or worker bee may arise.

The study of the Freiburg researchers shows for the first time that the genetic machinery to control polyphenisms also exist in mammals, and likely humans. While difficult to prove, an epigenetic switch that can produce distinctly different phenotypes based on the same DNA, could be a selective advantage. “Taking the whole population into account polyphenism adds diversity and thus could provide a buffer function. If one phenotype is not suited for critical environmental conditions, polyphenism offers a plan B, which could potentially contribute to the survival of the species” says Andrew Pospisilik.

Epigenetic therapies for obesity and other diseases?

Finally, the results also offer new insights into avenues for epigenetic therapies for complex human diseases. The idea that phenotypes or diseases might have strong switch-like epigenetic origins suggests that certain disease scenarios are entirely epigenetically driven and therefore that epigenetic therapies might be able to flip such switches off. “Our next major goal is to see whether we can modify this process, whether we can turn the disease switch on or off by supplementing diet, minimizing stress, or giving epigenetically relevant pro-drugs. The hope is that we can permanently flip the system back to lean in one shot” says Andrew Pospisilik.