Regulatory Circuitries of B Lymphopoiesis

B lymphopoiesis depends on the integration of extra-cellular signals by transcription factors that specify hematopoietic progenitors and allow for differentiation into highly-specialized effector cells. We are interested in understanding the molecular basis of B cell differentiation by dissecting the regulatory circuitries in which cell-type-specific transcription factors operate.

Toward this goal, we are studying the function of Early B cell Factor-1, EBF1, which is expressed in the early stages of the B cell lineage and in a subset of stromal cells in the bone marrow. Loss-and gain-of-function experiments indicated that EBF1 functions in a complex regulatory network with other transcription factors, in which positive feedback loops and cross-antagonism stabilize the establishment and maintenance of the B cell program. 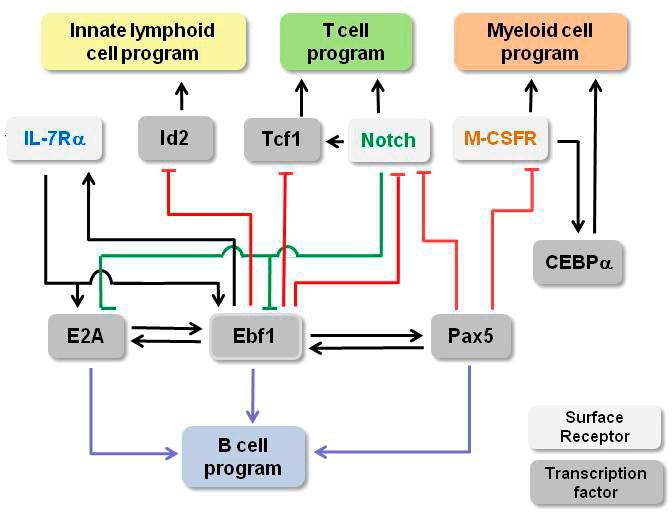 Recently, we identified a domain in EBF1 that enables binding to inaccessible chromatin (naïve state) in progenitor cells. EBF1 allows for cell fate determination by facilitating the binding of other transcription factors and the loss of DNA methylation. Moreover, we found that the maintenance of the B cell fate involves a “double lock mechanism” in which EBF1 and Pax5 repress distinct genes that mediate the permissiveness and responsiveness of cells to alternative cell fate signals.